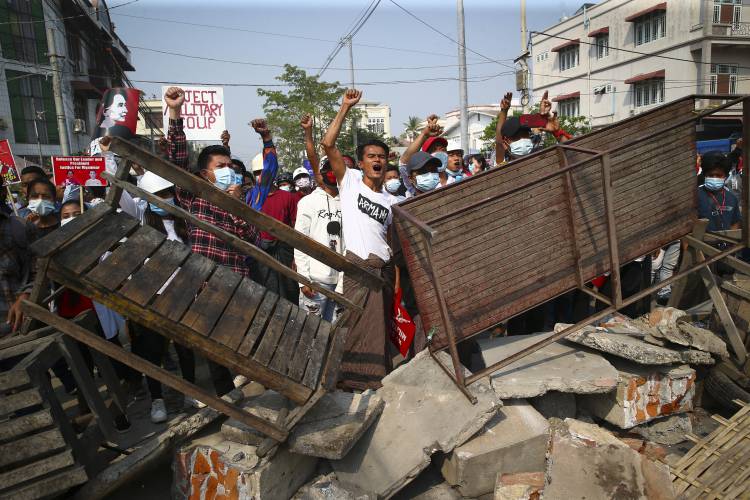 There are all sorts of Jew-backed riots taking place in Myanmar/Burma in the name of gay sex, democracy, abortions and other Jewish gibberish.

They have the full support of Jews like Kenneth Roth.

"The people of Myanmar have the right to assemble peacefully and demand the restoration of democracy….Use of lethal force against non-violent demonstrators is never justifiable under international human rights norms." — UN rights office. https://t.co/fndQFqJYKb pic.twitter.com/Xde2U8fHCR

The media is claiming that the military which took control over the government because of election fraud allegations is shooting protesters.

They probably are shooting protesters to keep order but who the hell even knows what’s really going on considering the sources. These media sources are going to claim that the military is evil because they are against the military takeover of the country.

It’s basically the opposite situation in America where the Jews painted the pro-Trump supporters as terrorists and the Jew-backed Joe Biden regime as defenders of democracy even though they won a fraudulent election. It just shows how the Jew has no principles and just paints a narrative depending upon what suits their interest.

They do this because if there is no democracy the Jews can’t control the country through the media and social media brainwashing apparatuses that they control.

The military made the mistake of restoring access to the Internet after they took over. This is what has allowed all these weird ZOG protests and riots to take place. Had they just kept the Internet shut, it would have been difficult for the ZOG machine to organize all the chaos we are now seeing unfold.

Who knows though, maybe they’ll be able to maintain control, but only time will tell. I’m not optimistic considering what they’re up against.