Gab’s management claims that their site is a true free speech platform even though they keep undermining this claim with their own stupid actions and statements.

For those of you not familiar with Gab, it is basically a buggy and less functional clone of Twitter. In spite of its many limitations and problems, its main marketing point was that it offered a platform for free political speech. Many of us including myself have been using it for the past few months following the events in Charlottesville.

This promise of free political speech was severely undermined a few months back when Gab’s management team decided to ban weev for dubious reasons. A post on weev’s blog site goes into more detail about what happened. Long story short, the official reason for weev’s ban was that he was allegedly inciting violence. In truth, the post he was specifically banned for was general commentary about how violence can influence the behavior of people in power.

I’d also like to note that they banned him at around 2 AM EDT. They seemed to pick a time when there’d be few people on the site in order to limit the fallout from the ban.

I personally believe that post was just an excuse to push him off the site. It appears as if the real reason he was banned was because he’s a high profile figure who has been publicly critical of Gab’s management. There’s also the possibility that Gab’s management was fooled into believing that weev’s post was illegal even though it contained no specific threat of violence. It could have even been a combination of both. We don’t really know 100 percent. Either way, the ban was dubious and was criticized by many in the community.

Meanwhile, there is at least one case of a user on Gab having posted a specific and targeted threat of violence. This from the user @DeplorePaulable. This user made a specific threat of violence to my friend Azzmador. One post even shows him holding a firearm inferring that he plans on using it to shoot him.

There are at least three separate posts from that user advocating targeted violence. Yet despite the threats, he has not been banned.

The point of this is that this user posted a specific threat of violence. This proves that weev’s ban was motivated not by their desire to have violent posts removed from the site. The ban was motivated by something else entirely.

Fast forward to this past week and we see Gab’s Chief Operating Officer Utsav Sanduja making numerous statements about weev’s ban. He’s made several Gab posts gloating over the ban while mocking the Daily Stormer getting censored by numerous domain registrars. Hilariously he claims that you can post what you want so long as you don’t incite violence even though we have an example of them not banning someone for doing that.

Here’s just some of the ridiculous nonsense he’s been posting. 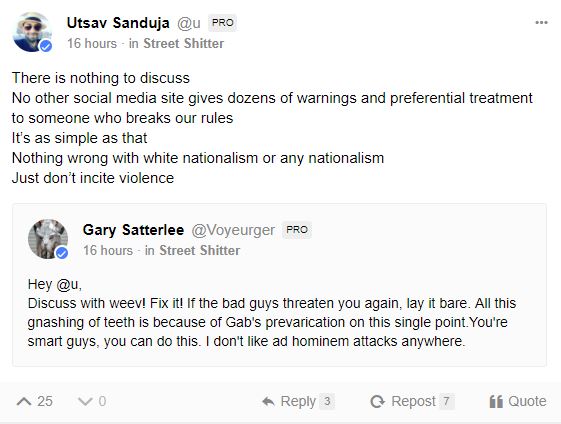 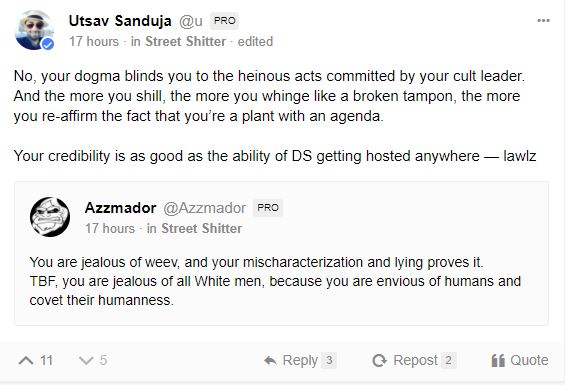 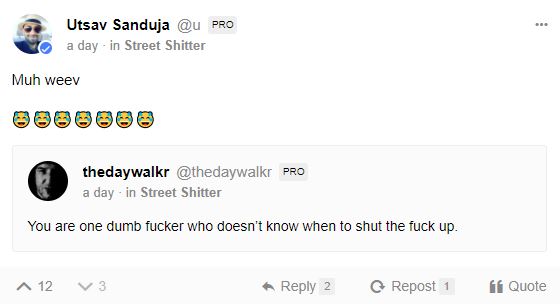 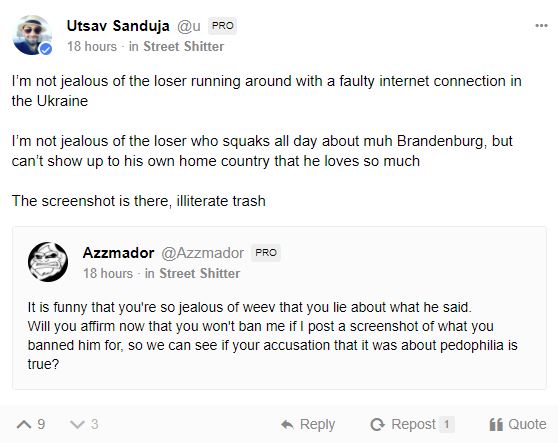 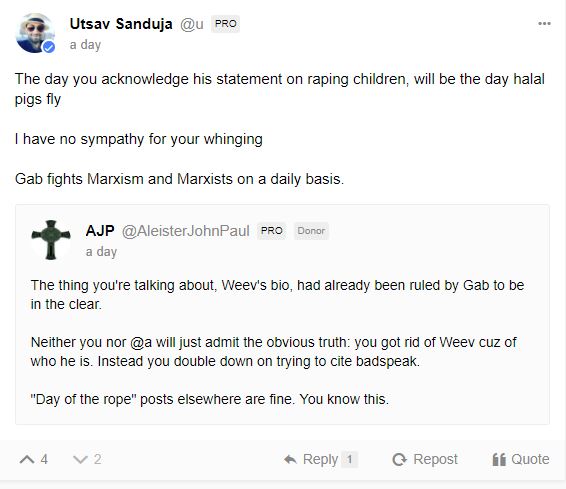 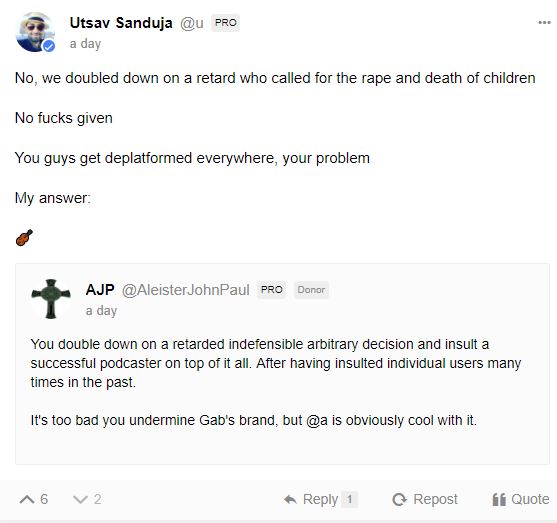 Gab’s management has deleted weev’s entire post history so it is impossible to verify if what they’re saying about his post history is true. What I can say is that I followed weev on Gab before he got banned and I didn’t see anything he posted that raised alarms. Certainly nothing illegal or anything that would have violated Gab’s guidelines. 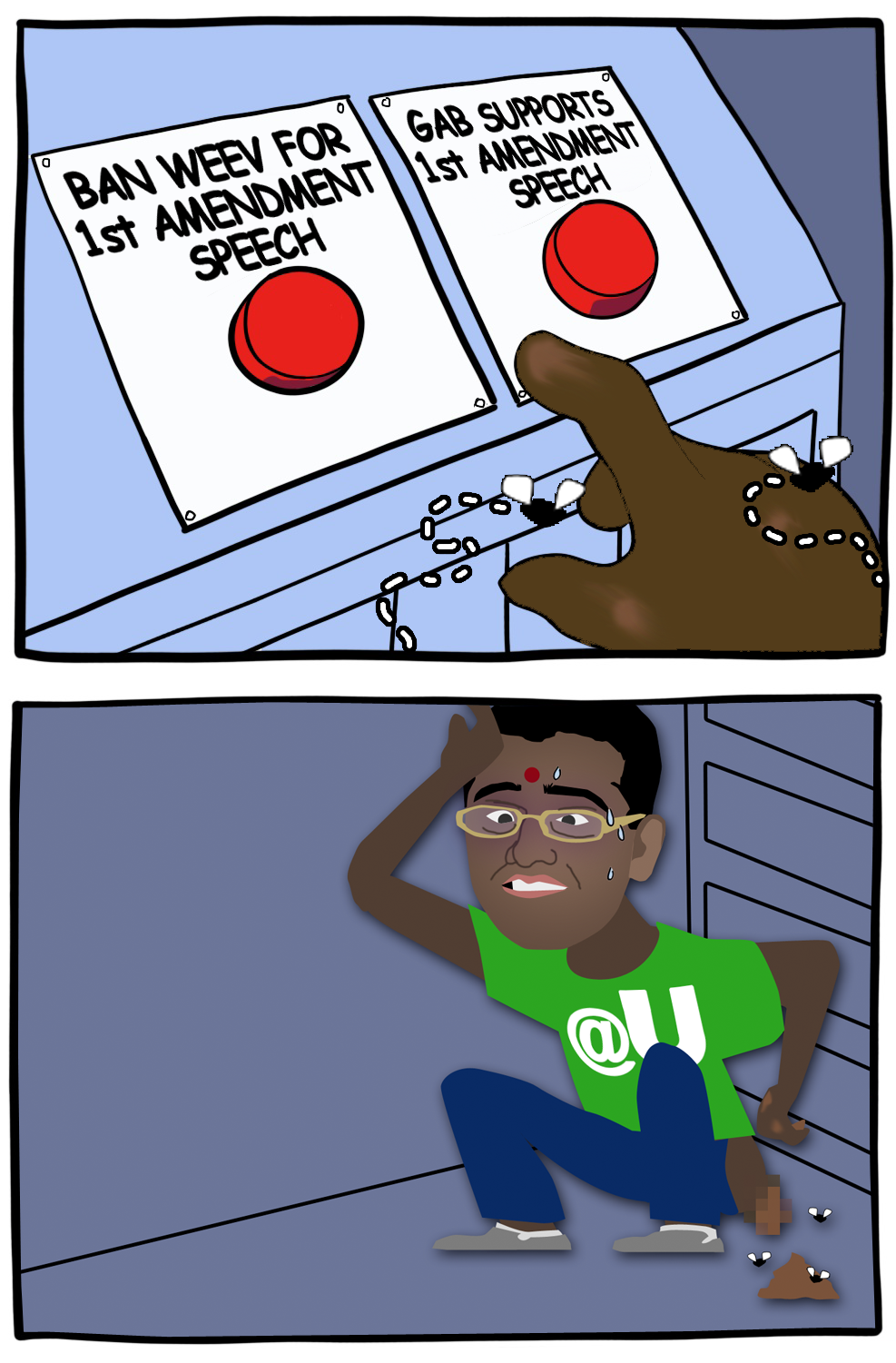 Gab has sold itself as a social media site supportive of free speech. Clearly, this entire concept that they’ve sold is in question when you have its Chief Operating Officer making statements like the one’s I’ve documented.

You can tell by his posts, Utsav desperately wants to drop the ban hammer on us. His comment about investors is telling. He claims that the Daily Stormer and its readers are damaging Gab’s brand. This is entirely incorrect. They’re damaging their own brand with their foolish chicanery. Many in the Gab community have noticed this and have publicly expressed their dissatisfaction.

Gab as a Twitter clone is slow and clunky as fuck. It’s a very limited platform. You can’t see posts unless you have a user account, you can’t embed Gab posts on external blogs, replies clog up your main feed and there’s all sorts of bugs. The engineering of the platform is terrible. You would have thought that after raking in over a million dollars in investments that they would have been able to make some engineering improvements. This has not come to pass.

Due to its limitations, the only selling point Gab has is if it is a true free speech platform for political dissidents. It needs to be a place specifically geared towards people who have been banned from places like Facebook and Twitter.

They’ve completely undermined the site’s main selling point and continue to undermine it with their own statements.

It’s probably also worth mentioning that Utsav’s wife has apparently been identified as a Jew who works at a Washington DC synagogue known for its Mossad connections. Perhaps that’s why he is showing such open hostility to the Daily Stormer and its readers. Considering Utsav’s recent behavior, I believe that these claims need to be investigated further.

And then you have this.

Of course Gab’s CEO Andrew Torba will claim that you are retarded if you think this is a weird coincidence. Go figure!