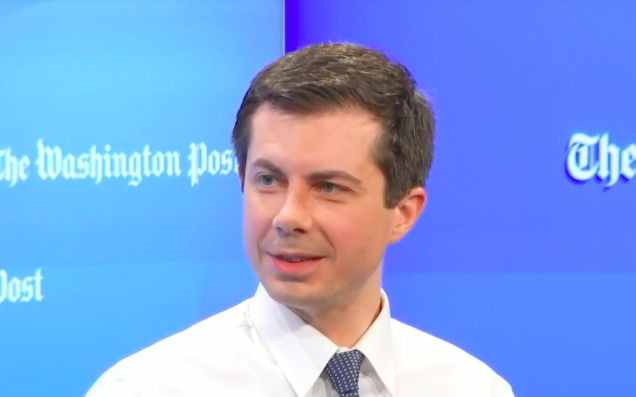 This Pete Buttfag cocksucker was at a campaign stop claiming that White nationalism is the most deadly form of terrorism in the United States.

Mayor Pete Buttigieg continues warning of the rising threat of white nationalism, telling voters in Iowa over the weekend he believed that it was the most deadly form of terrorism in the United States.

“White Nationalist violence has killed more people on American soil than any other source of terrorism,” he told voters in Shenandoah, Iowa, on Saturday. “We got to name that, confront that and say that is not us.”

The audience of Iowa Democrats applauded and cheered Buttigieg’s statement.

Buttigieg did not compare statistics between violent attacks from white nationalists in the United States and attacks conducted or inspired by radical Islamic terrorists such as the 2,977 Americans killed in the 9/11 terrorist attacks, the Pulse Nightclub shooting, the San Bernardino shooting, the Boston Marathon bombing, or the shooting at a military base in Fort Hood, Texas.

The South Bend mayor frequently warns about the existential threat posed by white nationalists as he continues his run for president.

“It could be the lurking issue that ends this country in the future if we don’t wrangle it down in our time,” he told ABC News on Saturday.

This faggot is either a complete dumbass or a liar. When you consider the 9/11 attacks, it makes his entire argument null and void.

Shit like this is why homosexuals belong in mental institutions instead of running for public office. Any man who willfully takes dick in his asshole has a mind that is damaged. Pete Buttfag’s mind is obviously not right and I believe it is a direct result of him taking dick up his ass.