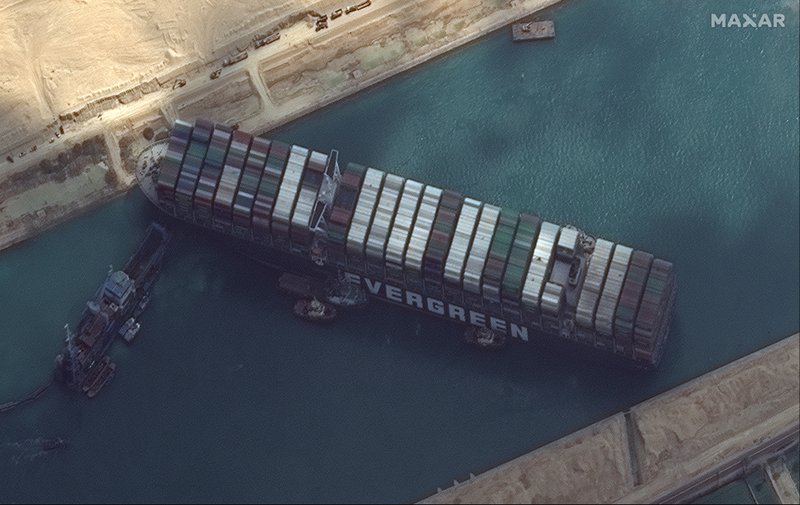 Somehow a ship captain has managed to get a cargo ship stuck in the Suez Canal in such a way that no other ships can pass through. The Suez Canal is an extremely critical path for cargo ships to travel so ships between Europe and Asia can efficiently move goods. This debacle has totally blocked the canal. This path being blocked forces ships to travel around the horn of Africa which is thousands of miles of sea travel.

Efforts to dislodge the ship from its current position have failed and there is no sign that the problem will be fixed anytime soon.

The company that owns the giant container ship stuck sideways across the Suez Canal said an attempt will be made to refloat the vessel by taking advantage of tidal action on Saturday. The clogged canal has caused a 200-ship traffic jam. https://t.co/iVRepT31jd

The fiasco is causing all sorts of problems with global trade. Billions of dollars in goods can’t move because of it.

Suez Canal blockage is delaying an estimated $400 million an hour in goods https://t.co/IPKnnoatwi

The fact that this has happened is ridiculous in its own right but the problem is exacerbated because of how global trade exists right now. If countries manufactured their own stuff instead of relying on China and other Asian countries, this bizarre issue would not have as much of an economic impact.

The whole situation is just dumb. There’s nothing else to say besides that. Who knows how long this ship will be blocking the canal. Could be weeks or even months. Nobody knows.