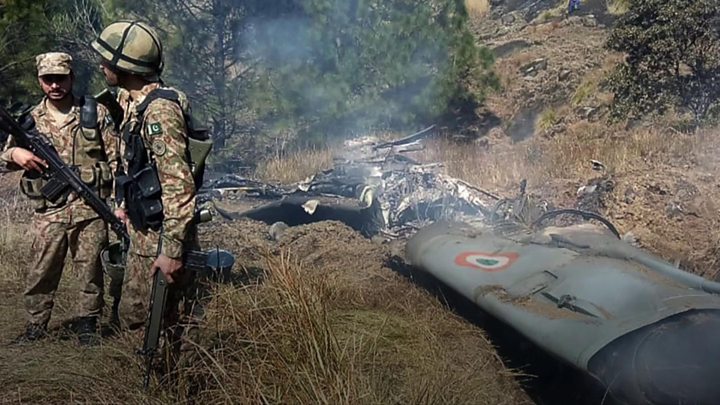 The situation between Pakistan and India over the disputed region of Kashmir is really starting to heat up. Pakistan just shot down a couple of Indian jets. One of the Indian pilots got beaten by locals after ejecting from his aircraft.

Tensions between two of the world’s nuclear powers were raised dramatically Wednesday after Pakistan’s air force said it shot down two Indian warplanes that crossed the disputed Kashmir border and captured each of the aircraft’s pilots.

Police officials in Indian-occupied Kashmir told Reuters two Indian pilots and a civilian on the ground died when the planes crashed. The officials did not confirm the planes were shot down by Pakistani forces.

One of the pilots, named as Wing Commander Abhinandan Varthaman, was subsequently shown in a video. India’s government said it objected to “Pakistan’s vulgar display”.

He was seen in two videos, one where he appeared blindfolded and bloodied, and then a second one showing him in custody with the blindfold removed, appearing visibly more relaxed, even complimenting his captors on a “fantastic” cup of tea.

Raveesh Kumar, a spokesman for India’s Ministry of External Affairs, also claimed an Indian plane shot down a Pakistani fighter jet — although Pakistan denied any of its jets had been hit and photographic evidence had yet to emerge.

Footage showing the Indian pilot getting beaten was uploaded on to the tubes.

But long story short, it appears as if this situation is escalating. Both countries are nuclear powers so there is a potential for nuclear war. That’s assuming that their nuclear arsenals actually function. As mentioned in yesterday’s article on this bubbling situation, these are primitive people who have a hard time shitting in toilets. So can they even maintain a nuclear arsenal? I’m skeptical.

Overall though, a big war between these two mud countries would be pretty funny to watch. Especially if it went nuclear. It would at least make the news cycle a bit more interesting. The past two years has been dominated with all sorts of dumb shit about Russia hoaxes, kikery and lots of other gay shit that I don’t really care about.

Jew From Germany Was in India Protesting Moslem Citizenship Ban