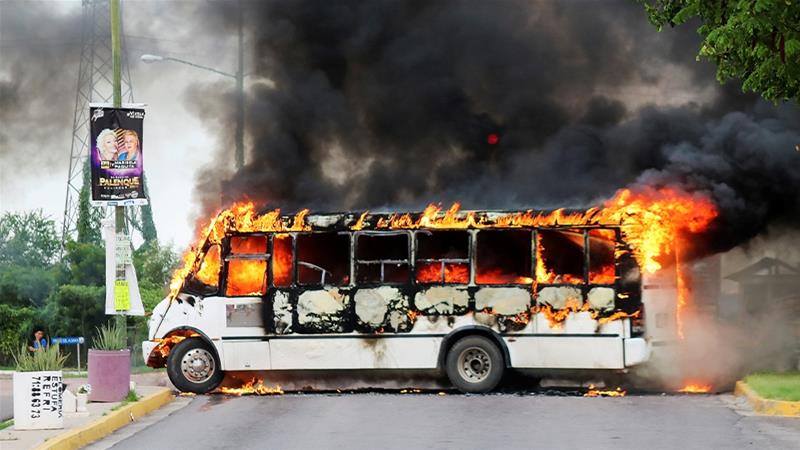 As the orange man orders American military forces to secure oil fields in Syria on the other side of the world, Mexico’s government has shown that they have no control over the drug cartels operating in their country.

Twenty-seven of 31 suspected cartel members arrested this week in a Mexico City raid were freed by a judge, President Andres Manuel Lopez Obrador said on Friday, marking his government’s second high-profile failure to keep suspected criminals locked up in as many weeks.

The suspects were nabbed by security forces in a central district of the capital on Tuesday after authorities seized two laboratories used to produce synthetic drugs, 50 kg (110 pounds) of chemical precursors, more than two tons of marijuana and 20 kg of cocaine, as well as an unspecified amount of money, rocket launchers and grenades.

Lopez Obrador, speaking at his regular morning press conference, said the unexpected release of the criminal suspects would be investigated but cautioned against a rush to judgment.

“Here the important thing is to see what the arguments were that were used to release these people,” said the leftist leader, who took office in December. “Let’s not rush. If someone acted improperly, illegally, if there was corruption, we will condemn it,” he said.

With homicides on track to hit an all-time high this year and following the bungled arrest last week of a notorious drug lord’s son, Lopez Obrador’s approach to security has come under increasing scrutiny.

Sinaloa Cartel gunmen on Oct. 17 overwhelmed security forces who had detained one of the sons of jailed drug kingpin Joaquin “El Chapo” Guzman in the northwestern city of Culiacan, forcing the release of the son and prompting a public outcry.

The government is just releasing drug cartel members who have been charged with crimes and they just lost a battle with one of the more prominent cartels in the country.

Considering the highly unstable situation in Mexico, this is clearly one of the biggest national security threats to the United States. Unlike Syria, Mexico borders the United States and it is becoming increasingly clear that violent drug cartels have more power than the government. And it is safe to assume that things are going to get worse considering the weakness shown by the Mexican government.

But what do I know, maybe using American military power to protect Israel and steal the natural resources of countries thousands of miles away is more important than protecting our southern border. I’m sure if you asked your average Jew on television, they would agree.

AOC Says Reagan, FDR Were “Racists” and America is “Garbage”