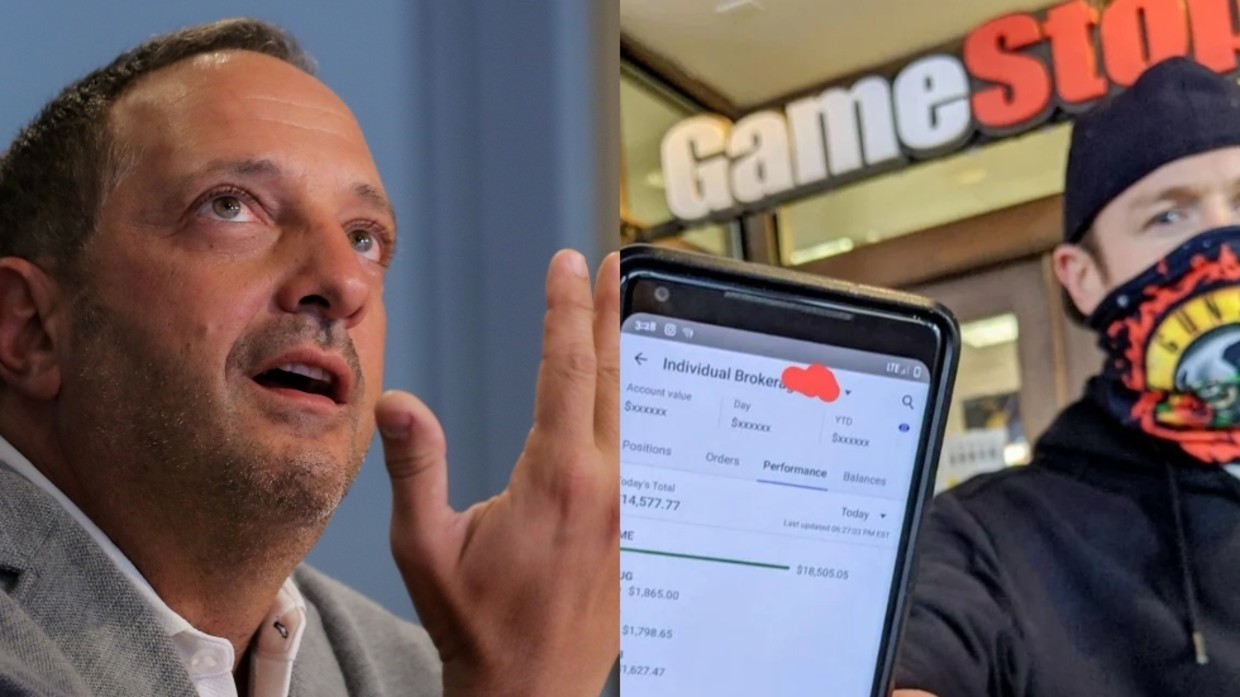 Jewish hedge funds which have long treated the American economy like their own personal casino, finally got a taste of their own medicine today. Several hedge funds which maintained large short positions of GameStop stock racked up enormous losses after Internet autists on the Reddit message board /r/WallStreetBets coordinated massive purchases of the stock.

Just look at all the Jewish names in this news blurb.

The NASDAQ has paused trading after internet “degenerates” spotted Wall Street gearing up to make a killing, beat the traders at their own game, and got filthy rich while destroying the US’ top hedge funds. Buckle up.

As trading opened, Friedman kept her word and the buying and selling of GameStop stock was halted intermittently throughout the morning, in a bid to stave off the “manipulation” she warned about. But what was it about one failing video games retail company that sparked such panic on Wall Street?

A fixture in American shopping malls, GameStop once held launch-night parties for the biggest annual releases, but has seen its business fall off a cliff in recent years due to digital purchasing and the decline of malls nationwide. Enter the short-sellers. Put simply, hedge funds looking to capitalize on a failing business can borrow shares in a company, immediately sell them, and ideally, buy them back later at a lower price to pay back the original lender while pocketing the difference. Should the price rise instead of fall, however, these funds have to pay back the shares at the new, higher price.

Profiting off a failing business may seem either a canny move or the epitome of vulture capitalism, but it’s a common practice. Wall Street’s top investing firms even help each other identify stocks ripe for the picking, as Citron Research did when it deemed GameStop a “failing mall-based retailer” in “terminal decline.” Citron Research and Melvin Capital both bought tens of millions of dollars worth of short positions in GameStop, but soon learned the hard way that in short selling, there’s no end to the amount of money one can lose.

The two million members of Reddit’s ‘WallStreetBets’ community took an interest in GameStop back in August when they noticed the arrival of pet supply e-tailer Chewy’s co-founder Ryan Cohen to its board, signaling there was some life in the company yet. When they noticed that Melvin Capital and Citron had bought the stock short, they decided to start buying, pumping up its value, partly to make a buck and partly to punish the hedge funds for profiting off the death spiral of a store ingrained in their childhood memories.

Throughout January, GameStop’s value shot up from $18 per share to $334 on Wednesday. As hedge fund managers whined and raged on television and Twitter, the WallStreetBets community dug their heels in and continued to buy.

Both funds took a beating, with rumors of Melvin Capital’s bankruptcy circulating on Tuesday. Melvin manager Gabe Plotkin told CNBC that these rumors were false, but the fund still needed a bailout of nearly $3 billion to cover its losses, before it closed its position that afternoon.

Citron’s Andrew Left said on Wednesday that he had managed to close his position at “a loss of 100 percent.”

With short sellers down $6 billion as of Tuesday, the self-described “degenerates” of WallStreetBets posted screenshots of their ballooning bank balances, reveling in their newfound wealth as Wall Street suffered. One poster reportedly turned $55,000 into $13 million, while another posted a screenshot of his $64,000 gain, announcing“I can now write my mom a check and put my sister through lymes treatment. This has been a very rough year, but I’m so thankful for every single one of you.”

On top of NASDAQ suspending trading of GameStop stock, several brokerage firms have suspended trading preventing people from buying it.

A Discord server used by /r/WallStreetBets has reportedly been shut down for all sorts of dubious reasons.

just in: Discord has shut down the /r/WallStreetBets server for "hate speech, glorifying violence, and spreading misinformation", a spokesperson for Discord tells me. "To be clear, we did not ban this server due to financial fraud related to GameStop or other stocks"

The financial propagandists on CNBC have been really sad about the whole situation all day talking about the need for regulation and other nonsense. Meanwhile, all these big Jewish hedge funds that got hurt by this have used elaborate financial instruments to scam people for years with no accountability. The fact that they can bet on a stock going down through “shorting” should be illegal. But it isn’t because Jews run Wall Street and have allowed these weirdly unethical financial mechanisms to run rampant.

The fact that big tech took action against this community at the exact moment these Jewish hedge funds were taking a bath in losses is only drawing more attention to how horribly corrupt the entire system is.

The banning of wallstreetbets on Discord just hit the Streisand effect for this Gamestop business.

It was never about the political parties. It's all about our new digital overlords.

The establishment has already greatly angered half the country with the stolen 2020 election and now they are angering an even bigger segment of the public with how they’re handling this GameStop business. They’ll probably try to shut everything down, but in doing so they’re just alerting millions upon millions of people as to how corrupt and rigged the markets are.

It will be interesting to see how this plays out. I personally hope these same people that fucked over these Jewish hedge funds with GameStop, target the precious metals markets which have been heavily shorted and manipulated by JP Morgan and other Wall Street firms. Specifically, if everybody flooded into silver, it could potentially bankrupt JP Morgan and others that have enormous short positions on it. Of course, rather or not that would succeed is a whole other question. But it would potentially threaten the viability of the system if silver were to experience gains similar to what we just saw with GameStop stock shares.