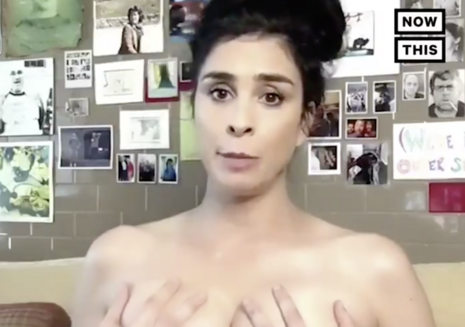 I noticed on Twitter that the ugly Jewess Sarah Silverman was trending so I figured she had done something weird and gross.

Turns out I was right. Silverman and other Jews like Amy Schumer and Chelsea Handler appeared nude with other “celebrities” in a video apparently designed to get people to participate in the mail-in voting scam.

Nobody cares about Hollywood, any of these idiotic Jews or their retarded celebrities in this current environment. We are in the middle of a depression caused by a lunatic virus hoax. People have very serious problems that they are currently dealing with.

The vast majority of people are on Twitter mocking these retards for putting out this dumb video.

Sarah Silverman, Chelsea Handler and Amy Schumer getting naked trying to inspire votes for the Democrats might be the best advertisement for the Republican Party in history.

The D in DNC stands for Degeneracy.

WTF is wrong with these people https://t.co/T6HGvzVHTD

This is the best Pro-Trump ad I’ve ever seen. https://t.co/xhRNJ7WagL

The ones who aren’t mocking them, are simply giving their opinions on Silverman’s tits. Take for example this person. He didn’t give a shit about the video’s message he just wanted to see some middle-aged Jew breasts.

Sarah Silverman makes sure her tits are included in the shot. I didn't listen to anything they said, I just waited for her tits to get back on the screen. I imagine that's not the impression they were going for with this video.

They must be really desperate because this appeared to be a serious attempt by the Jewish communist left to get people to participate in this mail-in voting fraud.

Things aren’t looking for good you people. You might want to consider a flight to Tel Aviv. That is of course if Israel will let you in due to the virus hoax that your own tribe has been feverishly promoting.