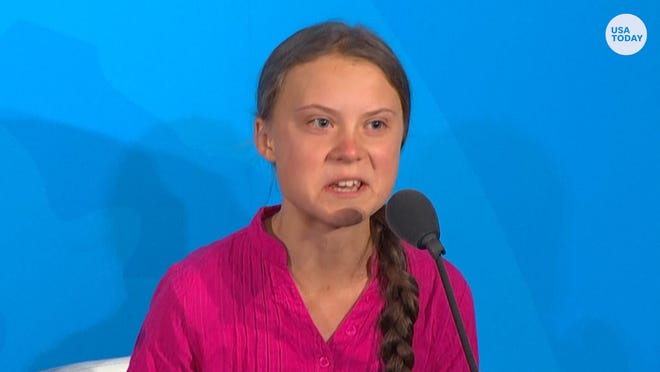 The angry retarded child and expert climate scientist Greta Thunberg, is blaming fossil fuel emissions for why Africans are poor and have no money.

Teen activist Greta Thunberg has hosted a press conference to stress the importance of how climate change is affecting people in Africa.

One of those taking part was Vanessa Nakate, a Ugandan at the centre of a race row at Davos last week.

She was angered after she was cropped out of a photograph taken with her white peers, including Ms Thunberg.

She said activists in Africa campaigned as much as their counterparts elsewhere but were often ignored by the media.

“This is the time for the world to listen to the activists from Africa and to pay attention to their stories,” Ms Nakate told journalists via a video link from Uganda’s capital, Kampala.

“This is an opportunity for media to actually do some justice to the climate issues in Africa.”

The event was organised in the Swedish capital, Stockholm, by Ms Thunberg’s #FridaysForFuture movement, which she started in August 2018 inspiring millions around the world to demand more be done to stop climate change.

The 17-year-old said she wanted to use the media attention she attracted to focus on climate change in Africa as “the African perspective is so under-reported”.

Obviously the only solution to this problem is to raise taxes on White people and force everyone on the planet to eat bugs. We must also allow China to continue emitting as many fossil fuels as they want. This is the only way to stop climate change and to end the suffering of African niggers.