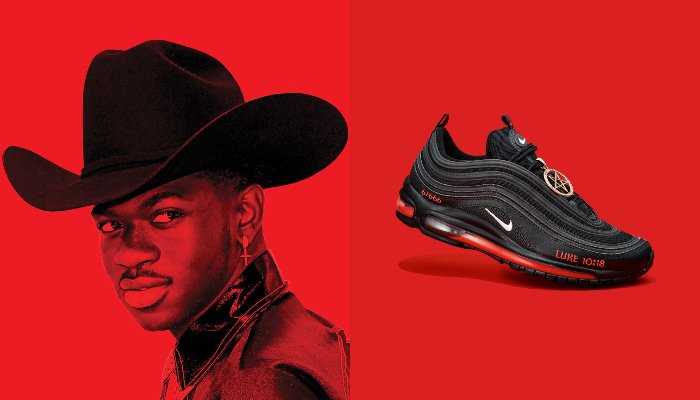 Some gay black rapper who I’ve never heard of named Lil Nas X is promoting a satanic Nike shoe brand which includes human blood in the shoes themselves.

Franklin Graham commented about this strange development along with the new Lil Nas X music video which includes all sorts of gay satanic shit.

Rapper Lil Nas X is producing 666 pairs of Nike shoes called “Satan Shoes.” The shoes are part of promoting a new music video in which this rapper descends down a stripper pole and gives Satan a lap dance. The morals in this country have fallen so fast. https://t.co/JlVrzLsRYt

“Satan Shoes" — each pair of which will cost $1,018 — are a collaboration between MSCHF, the rapper Lil Nas X and, notably, not Nike. Also, there is blood in them. https://t.co/Eba0ek3quR

This is just another sign of America’s decline. What used to be a Christian nation has been taken over by satanic Jews who are promoting homosexual Negroid rappers selling pairs of “Satan Shoes.”

Little by little they’re introducing all this evil shit into society in order to undermine what morality is left. They are trying to dismantle the natural order and replace it with the most unnatural things imaginable.

Some of this satanic stuff was actually introduced in subgenres of heavy metal music decades ago, but to see it being included into rap with a gay nigga promoting it is just beyond weird. The satanic stuff in heavy metal music was confined to a smaller subculture of people. This on the other hand is being pushed directly into the mainstream.

Personally I don’t think any of this is good for America. I could definitely do without a gay satanic nigga promoting “Satan Shoes.”