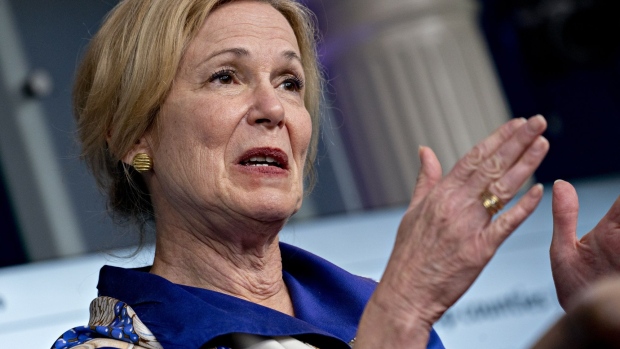 Deborah Birx also known as the “scarf lady” who was involved in the management of the coronavirus response under Donald Trump, did a recent interview blaming Trump for hundreds of thousands of coronavirus deaths.

Dr. Deborah Birx now says most U.S. Covid deaths ‘could have been mitigated’ after the first 100,000 if the Trump administration had taken appropriate actions. https://t.co/oKgTjEwdfu

Dr. Deborah Birx, the White House coronavirus response coordinator under former President Trump, said in a CNN documentary clip that she thinks the US could have saved hundreds of thousands of lives lost to Covid-19 following the pandemic's first surge. https://t.co/cB08LLbIaw pic.twitter.com/cXqvnYWYa7

This old hag is simply rewriting history and overexaggerating the death count which is a known hoax. They took all sorts of normally occurring deaths and blamed them falsely on the coronavirus which is basically just a flu-variant. She even admitted that these death numbers were wildly inflated due to how they calculated the death totals in a press conference. The clip of her saying this is being constantly deleted off of YouTube.

Birx along with Anthony Fauci were the two major figures in government promoting all these lockdowns, social distancing and other evil policies that have destroyed the economy, caused suicides, drug overdoses and wrecked the entire social fabric of the country. These policies have and will cause many more deaths than the coronavirus ever did. So based on that, Birx is the one who really caused mass death.

When nobody knew what this was in early 2020, Trump ordered the borders closed which at the time was a sane response. People like Birx and Fauci were saying that we shouldn’t worry about the coronavirus. Trump was even called an evil chink-hating racist by the Jewish media for banning travel to China.

They quickly shifted that narrative around March 2020 into claiming that this was the plague of death and used false models to claim that it would kill two million people. They originally said that we had to do all of these weird things for two weeks to stop the spread. That morphed into a constant shifting of goal posts into this strange reality of things that has lasted over a year now.

Trump should have never allowed Birx and Fauci to run the show on the coronavirus situation. It opened up all the mail-in voting fraud nonsense which they used to help remove him from office. It also caused an untold amount of damage which I doubt we’ll ever fully recover from. He did bring in Scott Atlas who offered a much better and sane approach but by then it was too late. The damage was already done by Birx and Fauci along with the Democrats and media who pushed this scamdemic hoax to the fullest.

On top of all that, Birx violated the very lockdown policies that she advocated for to visit her depressed elderly parents. She was forced to resign from the government after doing this.

This Birx woman should be arrested and put on trial for high crimes. She should not be walking free allowed to do interviews like this. But I guess she is allowed to walk free since she is blaming Trump for committing a virus holocaust.