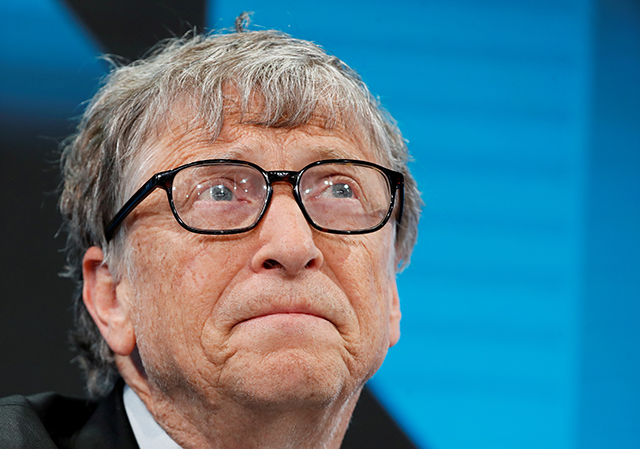 Bill Gates was recently interviewed by the homosexual CIA agent Anderson Cooper on 60 Minutes. During the interview, Gates described all sorts of bad ideas he has to solve weather changes which he alleges is due to carbon dioxide emissions. He further alleges that everyone will be doomed if we do not solve this fake problem.

Essentially Gates is claiming that we have to implement some sort of weird global communist system so people don’t emit carbon dioxide. He basically describes many of the things talked about in the “Great Reset” plan that the Jewish billionaire Klaus Schwab wrote about.

He specifically talks about how we need to reengineer the whole world changing everything from how cement is made all the way to getting people to eat microbes. The only thing that he endorsed that didn’t sound insane was developing improved next-generation nuclear power plants. But Gates is not a nuclear engineer so there’s no telling what’s going on with these projects he’s involved in.

The thing is, there is no real evidence that carbon dioxide emissions are causing weather changes. We’ve been gaslit with all sorts of wild claims and predictions about climate change for years and none of them have come true. We were being told decades ago that the ocean levels were rising and that cities would be underwater by now because of climate change. Those things did not happen.

This whole thing is a hoax so billionaire lunatics like Gates, wealthy Jews and other bad actors can rob you of your wealth, take your freedoms and change the world in bizarre ways.

Look, it is completely nuts that anybody would trust a man who developed subpar computer software to change everything about society over a problem that is not even proven to exist. There are real environmental problems like plastic in the ocean that aren’t being talked about because everyone is focused on this hoax. So this is not about saving the environment, it is about creating a global slave system using environmentalism as part of that justification.

All this climate change nonsense also appears to be part of a way to introduce a new global cult religion that will be centered around earth worship. In many ways this already exists due to all the propaganda and brainwashing young people have been subjected to. They have been told since birth that they will have no future and will die if something isn’t done about this non-problem.

Gates is dedicating the final years of his life to this deranged agenda and there is nothing good about it. I have no doubt that he will be in hell when he is dead for what he is doing.