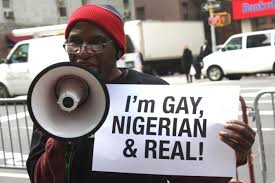 The Jewish handlers of Joe Biden are threatening Nigeria with sanctions because they won’t let men who fuck each other in the ass marry one another.